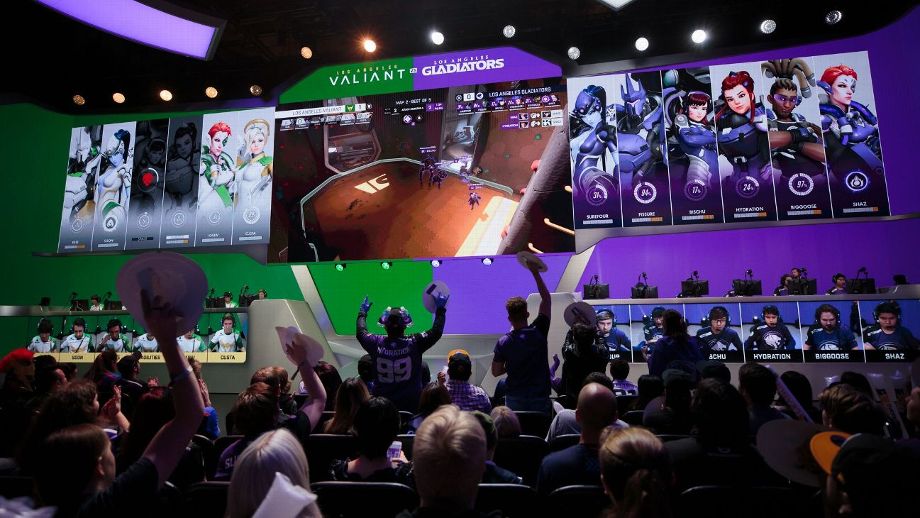 Fans cheer as the Los Angeles Gladiators and the Los Angeles Valiant face off during Overwatch League Season 1 in Blizzard Arena in Burbank, California. Robert Paul for Blizzard Entertainment

The multi-year broadcast deal includes the Overwatch League playoffs — which begin Wednesday night — the Season 1 grand finals from the Barclays Center in New York next month, the Overwatch World Cup this fall and Overwatch League Season 2 next year. In all, professional Overwatch will be broadcast in some fashion on the flagship ESPN network, ESPN2, Disney XD, ABC and streaming services for the term of the agreement.

It amounts to hundreds of hours of live and highlight programming across four networks, bringing Overwatch League competition for the first time to both linear and digital ESPN and Disney viewers. The agreement does not cancel existing distribution agreements already in place, like Twitch broadcasts.

“We are turning the corner here in terms of our interest and engagement in the esports category,” ESPN Vice President of Digital Media Programming John Lasker said. “We’ve had an interest and have been watching pretty closely how the first year of the Overwatch League has been progressing, and we’re really excited to be a part of this. Clearly by the way we’re going to be covering it starting with the playoffs and the finals this year certainly speaks volumes to our excitement and our enthusiasm overall for esports moving forward.”

Zero wins, forty losses. Every Overwatch League team wanted to have a special first season, but for the Shanghai Dragons, what they’ll be remembered for is infamous.

While the deal focuses on live and full replays of Overwatch competition and recap show on ABC, there is a broad swath of digital rights that the networks “plan to take full advantage of,” according to Lasker. That might include highlight packages for ESPN digital platforms or even supplemental content catered toward fans who might not be as familiar with Overwatch.

The agreement matches a strategy both the networks and Blizzard have to bring Overwatch competition to a wider audience. While they recognize some potential crossover, each distribution point represents a different demographic who might be interested in watching the highest levels of Overwatch gameplay.

“It’s a cross section that’s a hardcore sports fan, especially on ESPN channels,” Pete Vlastelica, president and CEO of Activision Blizzard esports leagues, said. “They love watching competition, they love watching the best in the world compete at a great game. Maybe they have played video games. Maybe they know of Overwatch. Maybe they even play Overwatch or play it a lot. But they’re fundamentally looking to be entertained by the highest possible level of competition around a great game. And that’s what we’ve got.”

Overwatch League debuted in January with 12 teams representing cities such as Boston, New York, Los Angeles, Shanghai and Seoul. The teams all compete from the Blizzard Arena in Burbank, California, which was the home of the “Tonight Show” with Johnny Carson for 30 years. In the future, teams will move to their home cities, and Overwatch League will become the first geolocated structured league in modern-day esports. Owners such as the Kraft Group and Stan Kroenke spent $20 million per team to reserve franchise spots last year, and an expansion is reportedly on the horizon.

This is not ESPN or Disney’s first time broadcasting esports events. ESPN has been showing esports competitions for several years on its networks and streaming channels, including the Heroes of the Dorm collegiate competition (in a partnership with Blizzard), the Capcom Cup Street Fighter V finals, and the Evolution Fighting Game Championships to name a few. The Overwatch League Contenders Series was on Disney XD last summer as well. But this is the first time all the networks have come together for a multi-year agreement. Financial terms of the deal were not disclosed.

“We’ve been in partnership with Blizzard for a long time, and we’re rather ecstatic about taking this significant step forward,” Lasker said.

Blizzard agrees, and compares their relationship to the ones ESPN enjoys with other major sports leagues.

Disney is the parent company of ESPN. The broadcast kicks off Wednesday night at 8 p.m. ET on Disney XD and ESPN3 when the Philadelphia Fusion takes on the Boston Uprising in the first match of the Overwatch League quarterfinals. Full OWL playoff and broadcast schedule is below.